In 2013, under its then new Chief Executive Officer, Allan Pollard, Trust House embarked on a complete overhaul of the business.

After five years the process is now complete, and the results are very pleasing, says Mr Pollard.

Based in Masterton, Trust House owns and operates a range of businesses in the lower North Island, including multi-segment bars, hotels and a boutique hydro electric scheme. It is also one of the largest community housing providers in New Zealand with around 500 rental properties in the Wairarapa and Tararua which it owns, operates and manages

Mr Pollard says the five-year long transformation has been critical to the organisation’s future.

“What I would like people to know is that they now have a very strong and sustainable organisation in Trust House – we are doing really, really well, but it has been hard yakka,” Mr Pollard says.

Driving the need for change was the increasing pressure on the organisation’s traditional retail segments, and a desire to focus more on social housing and hospitality.

It has meant selling off a number of under-performing businesses. Trust House also employs nearly 200 fewer staff compared to what it did five years ago.

“The buzz word for us over the last five years has been to make Trust House a sustainable organisation for the future. We feel that we are now and these latest results reflect that.”

Annual profits have been increasing year-on-year throughout the transformation process as has the organisation’s net worth, now more than 30 per cent higher than what it was in 2014.

The improved bottom line has enabled the organisation to return more money back to the community, one of it’s core fundamentals. Community grants, sponsorships and charitable donations for the 2017/18 financial year are more than 40 per cent higher than what they were five years ago.

“Always in the back our mind is our vision to make a positive difference to our communities. This transformation has ensured that we are able to do this now and into the future.”

Importantly, Trust House’s improved profitability has not come at the expense of its asset base with upwards of $4million reinvested into the business during 2017-18; the social housing portfolio, which included the completion of the Kuripuni Street regeneration program, received over $2.1million; close to $800,000 was invested back into Copthorne Resort Solway Park as part of the five year asset development plan; and there was $850,000 spent on other capital improvements across the organisation.

“Whilst our results are great, there is still plenty of work to do and we have some lofty objectives for the year ahead, with paying down debt and providing better outcomes for our tenants being the key elements of our plan.”

“The Board and Senior management would also like to take this opportunity to thank all the staff at Trust House for their tremendous support and efforts throughout the year.  The success that we report is down to their hard work and commitment, it is truly appreciated.”

The annual report is available here. 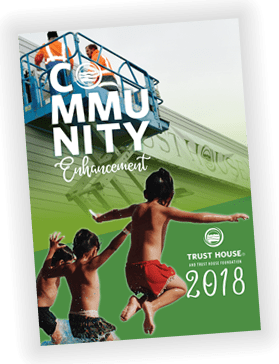