Flaxmere Licensing Trust’s ongoing commitment to education in its community has been the catalyst for big gains in student learning in the largely underprivileged Hastings suburb.

The trust has injected more than $1million into the Flaxmere Schools Cluster over the last ten years.

The annual grant of around $100,000 to the five schools has in recent years gone on the purchasing of iPads, Chromebooks and other devices to help improve access to students.

All five schools are categorised as Decile 1, the Ministry of Education classification that puts them in the bottom 10 per cent based on the community’s low socio-economic profile.

Evidence that it has achieved this is overwhelming, Kibblewhite says, and the Trust has been steadfast in its continued support of the initiative.

“Obviously as a trust we take it one year at a time, but each year that the schools come back to us we are really excited at what has been achieved,” Kibblewhite says.

Education is key to unlocking young people’s potential, Kibblewhite says, and the trust is thrilled to be able to support these sorts of projects.

“Flaxmere is crying out for positive stories, and it deserves them. There are some wonderful things going on in the community, particularly in our schools.”

Kibblewhite says it is humbling to note the many groups and organisations working for Flaxmere providing their time and energy to improve the many facets of life within the community.

The Flaxmere Licensing Trust on average awards annual grants totalling around $500,000 into the community, with education receiving the largest allocation. In addition to the $100,000 for the Flaxmere Schools Cluster, the most recent funding round saw an additional $40,000 for other education and youth based initiatives.

One of the founding promoters of the Flaxmere Schools Cluster initiative, Peterhead School principal Martin Genet, says the kids in Flaxmere owe the Trust “a great deal of gratitude.”

At the gateway to Flaxmere, Peterhead is a glowing example of how a school can flourish in an economically poor community.

Fundamental to a successful school is skilled and passionate teachers, but having the resources to purchase devices and keep abreast with technology has become increasingly important, Genet says.

“Technology has become a bigger and bigger kind of tool for learning, and it has a whole lot of facets that we can use to unlock students’ learning potential,” he says.

“The trust has made this possible and the fact that they continue to recognise what we [the schools] are doing is something that everybody in the Flaxmere community should be very grateful for,” he says.

Peterhead boasts National Standards (for reading, writing and mathematics) of around 60-65 per cent, which for a Declie 1 school is “pretty phenomenal”. The Year 1-8 school has in some respects become a victim of its own success now at capacity with a roll of around 550 pupils.

At the other end of Flaxmere, Kimi Ora Community School is looking forward to better days with a $4.5million rebuild about to get underway.

When principal Matt O’Dowda took over at the start of 2016 the roll had slumped to 70 students. It finished the year with 140, and O’Dowda is confident that the numbers will continue on the same upward trajectory.

While the Ministry of Education is paying for the new classrooms, he says the trust money for technology devices is vital.

The relatively small roll at Kimi Ora means that there are a lot more devices to go round. O’Dowda says most of the kids don’t have computers at home.

“Our kids are just as clever as kids in any other school. The fact that they are hungrier to learn means that they have so much potential, and having technology available means that they can really excel.” 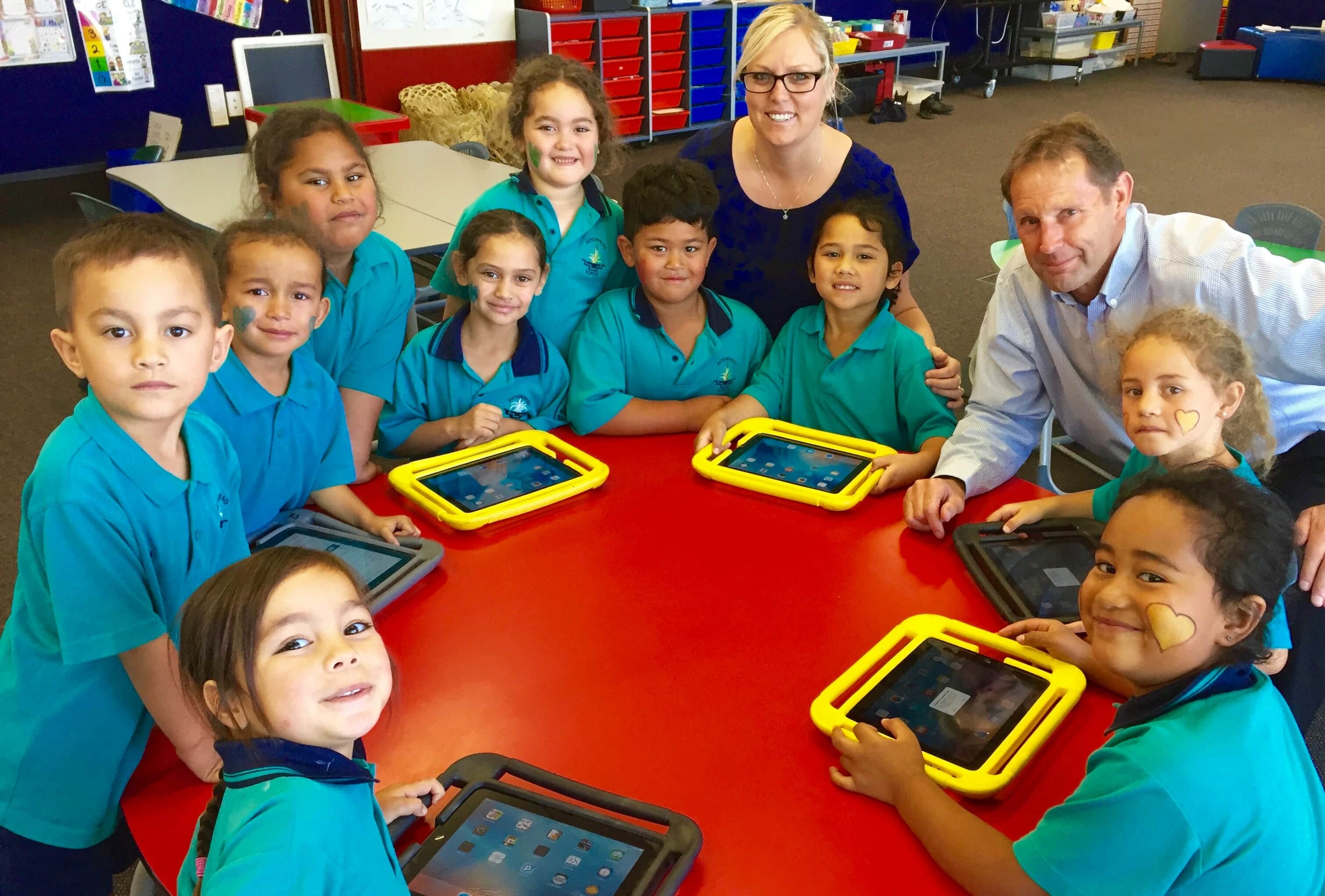 Peterhead principal Martin Genet and teacher Anna Berryman with a group of Year-1 students. Chromebook’s, iPads and other devices provided through funding from the Flaxmere Licensing Trust have played a key role in improving student learning at the Flaxmere school. 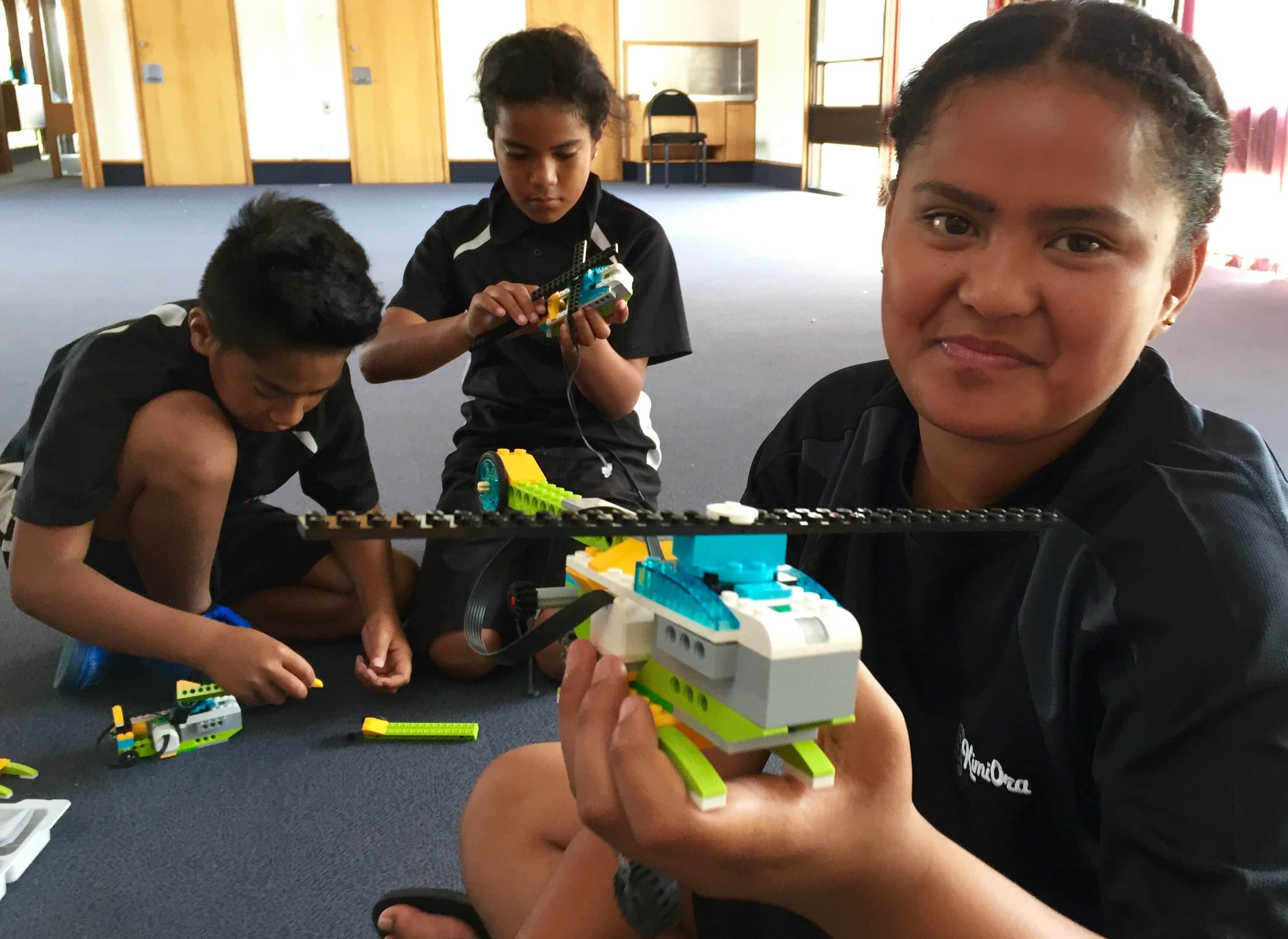 Kimi Ora Community School Year-6 student Lola Toliau shows off her helicopter creation. Lego and robotics are just some of the technologies used to advance student learning at the Flaxmere School.