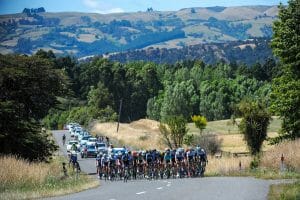 A landmark for locals the Castlepoint Lighthouse could soon be an emblem for Wairarapa the world over.

Celebrating its 30th Anniversary in January the New Zealand Cycle Classic is to include a stage which finishes at the coastal village of Castlepoint.

The five-stage elite international men’s road cycling race is the only Union Cycliste Internationale (UCI) sanctioned race to be held in New Zealand next year.

“With Trust House’s generous support and also the councils realising the huge potential of the event, we are going to be in a really good position to create something amazing,” Sandoval says.

The New Zealand Cycle Classic is recognised overseas as the premier cycling event in New Zealand pulling in top international riders. In recent years winners of the tour have gone on to win stages of the Tour de France and World Championships.

Clocking up 30 years marks a major milestone for Sandoval and he is looking forward to staging a memorable event with two new exciting routes in addition to the Castlepoint leg. The “Five Towns” will see riders cycle through all of Wairarapa’s townships and a fast and furious 12 lap, 10km circuit just west of Masterton is another new stage.

Traditionally a Wednesday to Sunday affair next year’s event will start on a Sunday finishing the following Thursday (January 22-26) as Sandoval looks to link it in with the Sun Tour in Australia which also has a strong contingent of international riders.

Trust House’s commitment to the event and the potential spin-offs for the region can not be overstated, Sandoval says.

Being held simultaneously with the NZ Cycle Classic is Huri Huri; Wairarapa’s Bike Festival. The festival features a variety of events and activities catering to all levels of involvement in biking and for all ages.

Mr Hancock says the double-header week of cycling events will be a big boost for the local economy.

For more on these two events go to www.cycletournz.com and www.hurihuri.co.nz