Mums and dads need not be alarmed if their little treasures want to pull on some boxing gloves and climb into the ring.

Chances are that they have got wind of the Wairarapa Boxing Academy, an organisation making a big impression on local youth.

Under the leadership of Head Coach Laurence Titter, the Masterton-based academy is using the discipline to help give young people a fighting chance of making a better fist of life.

“We haven’t reinvented the wheel,” Laurence says. “Boxing has been around for hundreds of years, and in fact for a long time was a mainstream sport in just about every college.”

Just like back then, boxing is a tool to help young people develop the values that will help make them better people; this includes respect for family and friends, to work on their attitude, to take control of their actions and the consequences, Laurence says.

All this, while at the same time, getting physical and burning off some energy; it makes a welcome change from being all-consumed with a gaming console.

Set up in 2018, the Wairarapa Boxing Academy have their headquarters on Dixon Street in Masterton, taking over what was previously the St John’s hall. It has about 120 official members, split into Mini’s mixed (5-7 year olds) Junior male and female (8-13 year olds) and Senior male and female (14+ years); but more broadly encompasses over 300 youth with it’s in-school’s program that reaches as far south as Featherston and Martinborough.

The academy has the backing of Police. National Police helped with the purchase of the building, done so on behalf of the Wairarapa Youth Charitable Trust.

Displayed in the foyer is a Certificate of Appreciation from the Wairarapa Police Commander, Inspector Scott Miler. Worded in the citation is: “Participants grow in self-confidence, fitness, positive behaviour, friendships and both individual and group values while consistently modelling respectful behaviour . . . The Wairarapa Police are proud to be associated with and be a supporter of the Wairarapa Boxing Academy and Youth Charitable Trust.”

Laurence has more than 30 years in and around the boxing gym, having taken up the sport when he was six years old. Boxing is always evolving and changing but the fundamentals of the sport are always the same, he says.

Gym Manager, Simon Ellis, says becoming a proficient boxer is not the number one aim of the Wairarapa Boxing Academy.

“Last year we had five members registered with NZ Boxing, this year we have nine, (including 2 females), and we send them off to tournaments wherever we can,” he says.

“But our main goals are to provide young people with life skills; what they learn here, and if they adhere to our values that are dotted around the wall, that will stand them in good stead for when they leave school and enter the big wide world.”

Among those values is helping out in the community; academy members regularly muck in at community fundraising events, including the Relay for Life in March.

Along with Police and other partners, the Trust House Foundation is an important funder.

“We are indebted to Trust House for their support. They provided us with a grant to purchase equipment to get us started and have been right behind us ever since. Their continued support has allowed us the opportunity to employ our head coach on a full time basis, allowing us to develop, not only, our membership and in-school programmes, but also, has increased our ability to work alongside the youth within our community.”

Simon says despite studies showing that young people should spend at least half an hour each day being active, many instead prefer screen time and therefore remain sedentary.

“Boxing is an excellent way for kids to stay active and give them something productive to do after school,” he says

“The beauty of a sport like boxing is that it doesn’t discriminate. It doesn’t matter what your socio-economic background is, when you come into the academy we are all equal, the only condition of course is that you adhere to our values.” 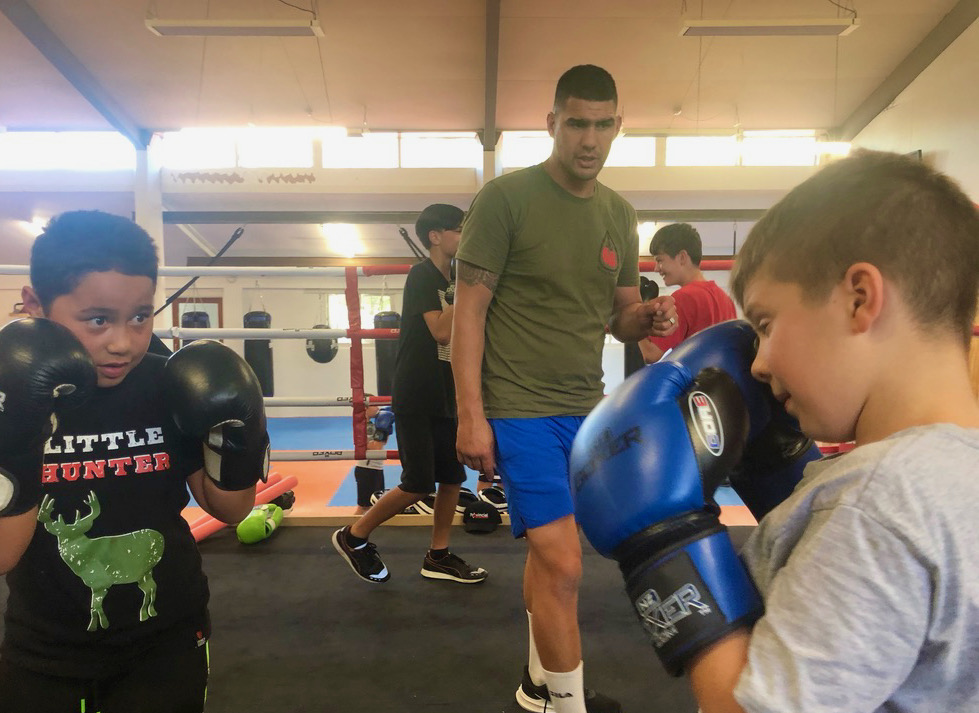 Laurence Titter in the ring with young students at the Wairarapa Boxing Academy’s headquarters in Masterton.